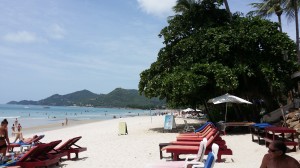 Usually when I travel abroad, I write a few emails about what’s happening during the trip and send them to friends and family as Travel Reports (“Reserapporter” in Swedish). This time I decided to use my blog instead. That way I can just email the URL once to those I normally sendÂ the reports to and tell them to subscribe to the blog if they want get future travel updates

Just this once (since I mentioned it) I’ll add the subscription token here in the post (otherwise you find in the Meta section to the right):

As a creature of habit, I find myself in Thailand once again. I have lost count on how many times I’ve been here since the late 90’s (some years two or three times), but why go somewhere else when you’ve found the perfect spot? I even stay at the same hotel most of the times, so it’s almost like a home away from home to me. 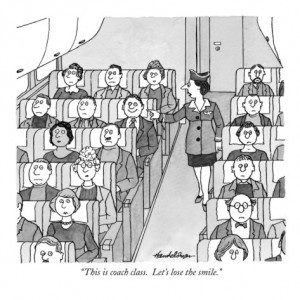 What? No fun in coach?

This trip is slightly different though. I’m traveling with my old buddyÂ Masse this time (I usually go alone), and since he is as poor as a church mouse, I’ve had to make some sacrifices. It’s been years since I got fed up with travelling coach, so now I only fly Premium or Business Class. It’s expensive, but when you spend 11+12 hours (it’s always an hour more on the way back since we’re flying against the trade winds then) on the plane, it’s worth it if you can afford it. Now I had to ride coach though :O Well, I didn’t strictly speaking have to, but I wanted to sit with Masse. It was alright though since we flew with a brand new Boeing Dreamliner which is rather comfortable even in coach.

At our destination, Koh Samui, I always stay at Aloha Resort on Lamai Beach. I chose Lamai over Chaweng Beach since the latter is too crowded for my taste. Masse is more of an action man than me though, so this time I’m on Chaweng.

We took the bus from LinkÃ¶ping to Stockholm, and then Arlanda Express to Arlanda airport. The bus was a good choice since the trains were delayed (as they so often are). 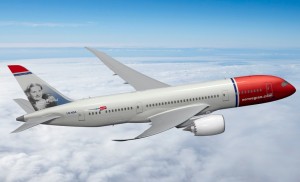 We flew with Norwegian from Arlanda to Bangkok. The plane was a new Boeing Dreamliner (a 787-8 to be precise). You may have noticed that there have been, and still are, lots of problems with the Dreamliners. We got lucky though. The day before we left I checked all Norwegian flights with the 787 for the last couple of days, and they were all delayed. The flight with the least delay lifted one hour after plan!

Our flight was actually right on schedule, and boarded in time. The take-off was still delayed for half an hour though (but not due to any problems with the aircraft). We were supposed to fly over Ukraine, but after that Malaysian passenger flight was shot down there by pro-Russian “rebels” a week ago, no airlines fly there. So we were to take a detour farther south, but since all flights did that, in addition to all the flights that go that way normally, we had to wait for a slot. So at least the wait was for a good cause 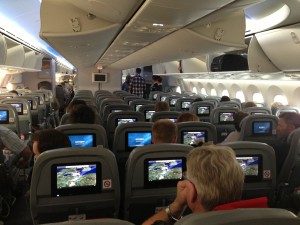 The flight lasted eleven hours. Masse dosed off a couple of times, but I wasn’t tired at all and stayed awake the whole time.

Flying economy class with Norwegian means that absolutely nothing is included except for the seat. You have to use a credit card to pay with if you want food, water, drinks, a blanket, headphones, and anything else you might need. But at least they have made it easy to order and pay. You just select the “shop” from the touchscreen in front of your nose, pick out what you want, swipe your credit card in the slot, and within moments a flight attendant comes along with your stuff.

At least you didn’t have to pay for the entertainment system (apart from the headphones if you don’t have your own with you – I had, but not Masse). I played some games, listened to music, and watched two movies. Well, one and a half. I started to watch Gravity, but that movie doesn’t really work on such a small screen, but I think I made it halfway through it anyway (I’ve seen it before). The HobbitÂ II (The Desolation of Smaug) that I watched next is of course also made for a big screen, but at least it has some actual contents (as compared to Gravity), so the visuals isn’t everything

We landed in Bangkok about 35 minutes late at 7:30 am, so I had 90 minutes before my Bangkok Airways flight to Koh Samui took off (Masse stayed in Bangkok for a couple of nights). I had already checked in over Internet, and I don’t have any baggage to check, so all I needed to do was to show up at the gate 40 minutes before boarding. Easy, right? Nope. After getting off the plane I had to walk a kilometer or so to the main building, wait in line at Immigration, get through Customs, and climb the escalator to Departures on the 4th floor. When I made it there I realized that my phone wouldn’t connect to any network (roaming didn’t work), so I couldn’t get at the email with my electronic boarding card.

Great! What to do now? The lines at the check-in counters were huge, and by the looks of the passengers waiting there, I would have been lynched if I had tried to cut in. The check-in machines (correctly) noted that I had already checked in and refused to let me do it again. I remembered that I had my old Thai SIM card in the wallet and tried to use it, but it was dead (probably disconnected since I hadn’t used it for so long).

By now I had already given up, but I started to look for a TrueMove (the operator that I prefer to use in Thailand) booth to get a new SIM card), and for a while I could still have made it in time, but it took me too long to find it. To ask for directions never hit me as an option – remember that I was stressed out and hadn’t slept for a long time…

Anyway, I bought a new TrueMove-H “3G Tourist Inter SIM” package with 30 days (cheaper than 2*7 days) Internet over 3G (up to 6 GB data). It works great, and TrueMove also have WiFi hot-spots everywhere, and they are free when you have that package.

Didn’t help me at the time though. So I went to Bangkok Airways ticket office at the 6th floor, fully expecting to have to buy a new ticket, but resigned to accept that in the hope of at least finding a new flight on the same day. I told my story (in short-form) to the lady behind the counter, and she simply re-booked me on the next available flight – at no extra cost?! Unfortunately, that flight wasn’t until 5:45 pm, but she also put me on the standby list and told me to check at the check-in counter every hour. I got really lucky and was one of three standby passengers to get on the next flight at 10:20, only 80 minutes later than planned

The flight was delayed 30 minutes, and it was a smaller, slower propeller plane, but I landed on Koh Samui around noon without further problems. The hotel was then just a ten minute taxi ride away. 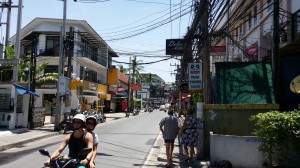 Looking north up the beach road from just outside the hotel…

I had found a really nice bungalow village by the beach in the southern, less crowded, part of the beach. The full name of the “hotel” is Tradewinds by LAWANA, but here it’s known as just Tradewinds. I have a “garden view” bungalow, but I can still see part of the pool, and beyond it the sea, from my porch. 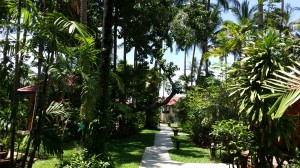 …and inside the gates looking east down the path to my bungalow and the sea.

I arrived here three days ago on July 25, so I’ve had a couple of days to settle in, and I really like it here. I was a bit worried about the noise at night (I generally go to bed quite early), but here in the garden I hear nothing but the waves of the ocean, and weak base tunes from the nearby bars. And the rain of course – it is after all the rain season, so there is a shower now and then…

Not my bungalow, but they are identical.

The bungalows are quite big, and orange with blue splines and red tile roofs. The porches are also big with stone tile floor and wooden furniture (I don’t like the plastic stuff that is so common down here). I couldn’t get a good picture of my own bungalow since it is surrounded by that green stuff, but there is a picture of the one next to mine somewhere on this page.

There’s no minibar, but a large fridge that I fill with drinks and snacks from the store across the street. And my snus for the trip of course.

Last night I woke up from a scratching sound by the window. It turned out to be two Gecko lizards playing around. I like those little creatures, and they eat mosquitoes and other annoying insects, so I let them be and went back to sleep. 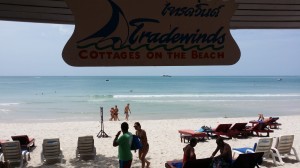 Sunrise is at 6:10 am, so I get up at six, sit on the porch until seven when breakfast is served in the beach-side restaurant 15 meters away. After breakfast I go for a swim in the sea, and then it’s back to the porch again.

It’s about an hour to sunset now (happens at 6:43 pm) and the mosquitoes are beginning to get aggressive. There are lots of places for them to breed here in the garden, which I guess is pretty much the only negative thing about staying here instead of at a “real” hotel. 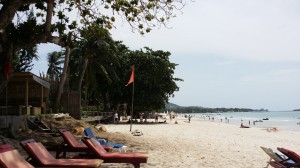 Looking North along Chaweng beach from just outside my hotel

Ok, one final picture from the beach and that’s it for now.