When I tell people that I am an atheist, I quite often get the response “You mean that you are an agnostic?” When I hear that, I know that I’m probably in for a long discussion, trying to explain to the person I am talking to what the words “atheist”, “theist”, and “agnostic” really means.

I created this page with the intention of explaining the related terms in a few simple words. However, since I started to do that, it has become more and more clear to me that it is not only that people do not understand the meaning of these terms. They have in fact different explanations in different dictionaries and other books, which of course complicates the matter tremendously.

So the explanations here are not quite as brief and straightforward as I intended, but at least I believe that they now correspond to what the majority of web-dwellers can agree on. At the very least, they certainly describe how I myself use the terms

If you have opinions about these definitions, don’t hesitate to comment on them below. I promise to read and respond to any comment that is not just an insult.

What is an Atheist? 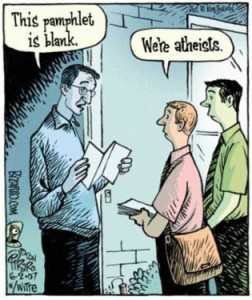 The answer to that question is much more simple that most non-atheists think:

Being anÂ atheistÂ means one thing, and one thing only;Â that you do not believe in GodÂ – and I mean not in any god or deity. There is no god, and there has never been one. That’s it! There is nothing more to it.

Maybe that sounds a bit disappointing to you? Well, I just wanted to make clear what the term atheist means, since there are so many people that do not understand it. However, when you are an atheist it more or less implies a lot of other stuff. For example, when you don’t believe in god – then where do you think that we all come from? How do you derive a meaning of life? How can you have an understanding of good vs. evil, or a sense of morality and ethics, when you don’t have a bible to tell you what is what?

I will address those topics in other pages here on the site, and I will try to remember to add links to those pages here as I write them.

So what is a theist then?

AÂ theistÂ is a person who believes in a personal god, i.e. a god that created the universe, the earth, and everything on it, and who is also around to listen to prayers and respond to them. Typically, a theist also believes in an afterlife, though that is not part of the definition. For example, all followers of Judaism, Christianity and Islam, are theists, though only Christians believe in a (relatively) clearly defined heaven and hell. Remember that theist is just a fancy word that can be used when you talk about religion in general and not a specific religion. Most Christians probably don’t even know what the word means – since they (in the same way as a Jew or a Muslim) believe that there is only one true religion, they do not really have an use for the word theist.

AÂ deistÂ is a person who believes that the universe was created by a god, and commonly also that this god directly created the earth and everything on it. The main difference between a deist and a theist, is that the deist believe that this god is no longer around, i.e. that after he created the universe, god either died, just vanished, moved on, or maybe that he is out there, but simply does not care about us one way or the other.

AÂ pantheistÂ does not believe in a god, but considers the whole of the universe to be divine. For example, Professor Albert Einstein was born by Jewish parents, but he was never a practicing Jew. Regardless of popular belief among Christians and Jews, Einstein was a pantheist. When you see a quote by Einstein where he mentions god, just replace the word “god” with the phrase “the Divine Universe” and you see what I mean.

There are other more obscure terms to define other variants of belief systems, but I don’t feel that there is a point in going on. Just one example to show you what I mean: AÂ pandeistÂ is a combination of sorts of a deist and a pantheist, i.e. he believes that there was a god that created the universe, but then he became the universe itself and seized to exist as a personal god.

What does agnostic mean?

Another word that you are likely to see in discussions about religion and atheism isÂ agnostic. Before I start on the meaning of this I want to point out that there is a rather big difference between what this word and term actuallyÂ means, and how it isÂ usedÂ by most people.

In its simplest form, the word “agnostic” means “without knowledge” (as derived from ancient Greek). Correspondingly you might see people using the word gnostic (in the meaning “withÂ knowledge”) as the opposite of agnostic, though “gnostic” is not strictly speaking a real word while “agnostic” is.

The word agnostic was invented by a man namedÂ Thomas HuxleyÂ in 1869, to mean that the truth of whether god exists or notÂ cannotÂ be known to man (unless god actually comes out and shows himself to us). In other words, being an agnostic means that you are of the opinion that that it is impossible to prove both the existence or the nonexistence of god. Does that mean that you are an atheist? No. Does it mean that you are a theist, then? No. Being an agnostic doesn’t sayÂ anythingÂ about whether you believe in a god or not – it is just a reflection of your opinion that no one can know for sure.

Remember that I said earlier that there is a difference between what agnosticÂ meansÂ and how it isÂ usedÂ by many people? What I said above describes the actual meaning of the term, but you will probably hear many people just saying that they simply areÂ agnostic. So what do they mean?

In reality, when someone say that he is an agnostic, it usually means that he (for any number of reasons) justÂ don’t want to tell youÂ about his true beliefs. If that is the case, you should typically accept that this is his wish and leave him be. But that of course depends on the context of the discussion. For example, if he has pressed you to admit to your own beliefs, then you should not let him get away so easily.

It can also mean that he doesn’t know if god exists, and that he just don’t care about it. My own opinion is that this is a perfectly acceptable position, but that he should instead say “Don’t know and don’t care”, since “agnostic” doesn’t really mean what he think it means. Others on both sides claim that you cannot hold this position, and that you by definition must be either an atheist or a theist. I obviously disagree.

And finally it can of course mean that the person doesn’t really understand the meaning of “agnostic”, in which case you could now clarify it for him and ask if he means agnostic atheist or agnostic theist. I would guess that close to 100% would then say “agnostic atheist”, because theists tend toÂ reallyÂ believe in their gods