↓
Home Menu ↓
Skip to primary content
Skip to secondary content
Home→Blog→Computers→Home server→Sharing a CDROM over the network with Ubuntu 14.04 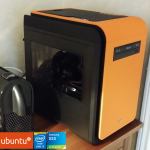 It’s been a couple of years since any of my computers at home had an internal CDROM (or optical drive, or DVD reader/writer, or what you want to call it – I’m old so I allow myself to keep calling it a CDROM). I’ve used an external USB-connected CDROM instead, but when I recently built my new home network server, “mother”, I decided to fit it with an internal CDROM that I could share to the other computers on the network.

Yesterday, I finally got around to setting up the share, and that turned out to be a bit trickier than I had anticipated. Not that it’s difficult once you learn how to do it, but the help that I found on the Internet wasn’t really much help at all to me. At least it gave me enough clues to keep searching, and eventually I got it to work. So I thought that I should share what I learned.

There are different ways to share a CDROM from Linux. You can for example use NFS or SMB to share the file contents of an inserted disk, but we will use NBD (Network Block Device) to share the CDROM device itself.

To be able to use NBD, we will install the NBD server package (nbd-server) on the computer exporting the physical CDROM, and the NBD client package (nbd-client) on any computer that wants to access the remote CDROM.

The device name of my physical CDROM is /dev/cdrom. I suppose there is a chance that yours is something else, so you might want to check that (and adjust the instructions below accordingly).

About access rights to the CDROM; If you look at the device file /dev/cdrom, you will see that everyone has read and write access to it. But if you look closer, you’ll see that this is just a link to the actual CDROM device file (/dev/sr0 in my case), which has a much stricter access list. More specifically, only the root user and the cdrom group can even read it. This is why we change the group parameter for the NBD server to cdrom, and let the nbd user join the cdrom group (see the next section).

On the computer with the physical CDROM

First we need to install the NBD server package:

You will get a warning about that the NBD server is quitting since there are no configured exports. Don’t worry about it – we’ll fix that soon.

The NBD server will by default run as the user nbd which was created automatically when you installed the package above. However, nbd does not currently have access to the CDROM device – only the root user and the cdrom user group have that. We don’t want to change the access list for the CDROM, and we don’t want the NBD server to run as root. Instead we will let nbd join the cdrom group. Use the adduser utility to do that:

There are a couple of things we want to do in this configuration file:

So – add the following lines (assuming the device name for your CDROM is /dev/cdrom) at the bottom of the file:

Then find (in the [generic] section at the top of the file) the line for the group parameter, and change its value to cdrom. Also, if you want to allow clients to list the available exports from this NBD server, add a line here (it may already exist) setting the allowlist option to true:

Now we’re done fiddling around with the settings, so save the file and then start (or re-start as the case may be) the NBD server:

On computers using the exported CDROM

During the installation, you will be asked what to do when the NBD client is told to stop. Answer “Yes” to the question “Disconnect all NBD devices on stop?” (unless you know what you are doing and are not satisfied with that selection).

Now that the client is installed, we can run an instance of it to import the CDROM device that we just exported from the server. The command below will do that; The first argument (mother in this case) is the hostname (or IP address) of the computer that exports the device. The -name option states that we want to import the device called cdrom, which is the name that we gave the exported CDROM in the previous section. The final argument (/dev/nbd0) is the local NBD device file that we want to use to connect the remote device:

Hopefully, you didn’t get any error messages, and then you can test that the NBD device is mounted:

The response you want to see from the command above is a single number, which will be the PID (Process ID) of the process that connected the device (you have no use for it, just be happy if you see it). If you don’t get any response at all, run this command directly after the one above ($? holds the status code for the previously executed command):

The value should be “0” if all want well, and otherwise “1” (meaning that the device you queried about is not connected or does not exist) or “2” (meaning that an error occurred). If you believe that you performed the steps above correctly and it still didn’t work, go to the server and use the dmsg command to look at the syslog and check for any error messages or warnings related to NBD.

So, now you have a local CDROM (sort of) with the device name /dev/nbd0 (or whichever one of the NBD device file names you used). In the same way as if it was an actual local CDROM, you must now mount it in order to use it. Unless you have already done so, you must first create an empty mount point directory (I chose to mount the CDROM as /mnt/cdrom):

The -t iso9660 option to the mount command tells mount that this is a CDROM. The -r option tells mount to mount the device as read-only.

That’s it. Now you can, for example, list the contents of the disk in the CDROM with:

Don’t forget to dismount the CDROM when you don’t need it anymore, and by then you should also disconnect the remote CDROM device: